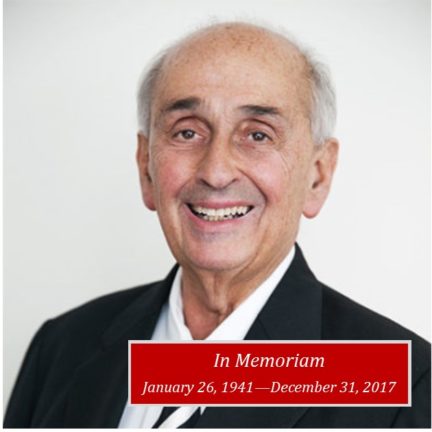 The firm mourns the loss of founding partner, mentor and friend, Howard J. Capell, who passed away on December 31, 2017.

In addition to his work for religious and philanthropic establishments, Howie’s clients benefitted from his extensive experience in a broad range of business and personal matters, including tax planning, estate administration, commercial and real estate transactions, and litigation.

A dedicated humanitarian, Howie supported many public charities and faith-based organizations by donating what he frequently referred to as his time, treasure and talent. He often engaged others to do the same.

He served as General Counsel to both the Metropolitan New York Synod of the Evangelical Lutheran Church in America and the Atlantic District of the Lutheran Church-Missouri Synod (governing bodies for more than 335 congregations, schools, missions, and programs). He was a trustee and executive committee member of the Interchurch Center, home to the regional offices of many religious denominations and other missions and organizations. In addition, Howie served on the Board of Directors for Quality Services for the Autistic Community, (“QSAC”), a $40M nonprofit organization) and other not-for-profit groups.

In addition to the numerous honors and awards presented to him for his dedicated philanthropy, humanitarian service, and pro bono legal assistance, in October 2012, Howard was awarded an Honorary Doctor of Laws degree by The Concordia College Board of Regents.

Howie leaves behind a legacy and will be missed by all of us at CBM&S.