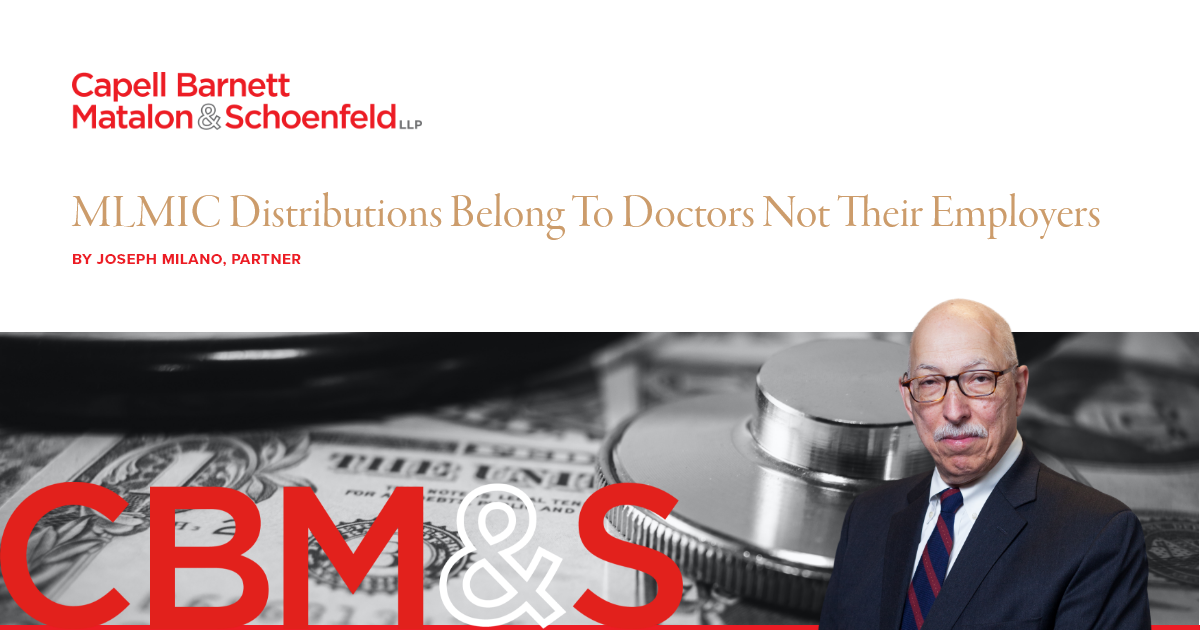 MLMIC Distributions Belong To Doctors Not Their Employers

On May 19, 2022, the Court of Appeals, New York’s highest court, ruled that doctors and other health care providers who were insured by Medical Liability Mutual Insurance Company (“MLMIC”) from July 2013 to July 2016 and not their employers, were entitled to the cash distributions made by MLMIC following their demutualization and purchase by Berkshire Hathaway, regardless of whether their employers paid premiums or administered the policies.  The Court specifically held that these health care providers would not be unjustly enriched by receiving that cash consideration from MLMIC.

We first posted about this in July 2018, announcing that doctors and dentists have potential to receive large payouts from MLMIC, the state’s largest medical-malpractice insurer, upon their acquisition by the National Indemnity Co., a subsidiary of Warren Buffet’s Berkshire Hathaway. Doctors, dentists and hospitals who were MLMIC policyholders from July 2013 to July 2016 were to receive a payment equal to about twice the malpractice premiums they paid during that period.

In September 2018, we posted that, after a public hearing, the New York State Department of Financial Services approved of the conversion, demutualization and proposed sale of MLMIC to the National Indemnity Company, a subsidiary of Warren Buffet’s Berkshire Hathaway, for $2.502 billion, and that MLMIC would distribute that $2.502 billion to “Eligible Policyholders.”

However, many hospitals and medical practices throughout the State of New York sued to collect the money from MLMIC themselves, claiming that since they paid the premiums they were entitled to the distributions and that the doctors and other medical providers would be “unjustly enriched” if they received those cash distributions.  The Court of Appeals strongly rejected those arguments in a series of eight consolidated cases, Columbia Memorial Hospital v, Hinds; Schoch v. Lake Champlain OB-GYN; Maple Medical v. Scott, etc.

The question presented to the Court of Appeals in those cases was: when an employer (hospital, clinic, medical practice) pays the premiums to MLMIC, a mutual insurance company, to obtain a malpractice policy for its employee, and the insurance company demutualizes, who is entitled to the proceeds from demutualization–the employer or the employee? The Court’s answer was clear that, absent contrary terms in the contract of employment, insurance policy, or separate agreement, the employee, who is the policyholder, is entitled to the proceeds.  None of the employment contracts or policies were to the contrary and there were no separate agreements to the contrary.

The Court also rejected the employers’ unjust enrichment claims, as “meritless,” holding that the employee doctors were entitled to the cash consideration under the insurance law and reasoning that the medical practices/employers could have written agreements assigning the demutualization benefits to themselves had they so chosen and their failure to do so does not render the outcome inequitable.

The Court of Appeals has now settled that the employee doctors/medical providers are entitled to the MLMIC cash distributions.  What remains unsettled is what happens to the cash distributions that many doctors were “induced” to assign or sign over to their employers.

Should you have any questions or need any further information, please do not hesitate to call or send an e-mail to Joseph Milano or any of the other lawyers at Capell Barnett Matalon & Schoenfeld LLP.

The Courts and Late Discovery: The Honeymoon Is OverPrev